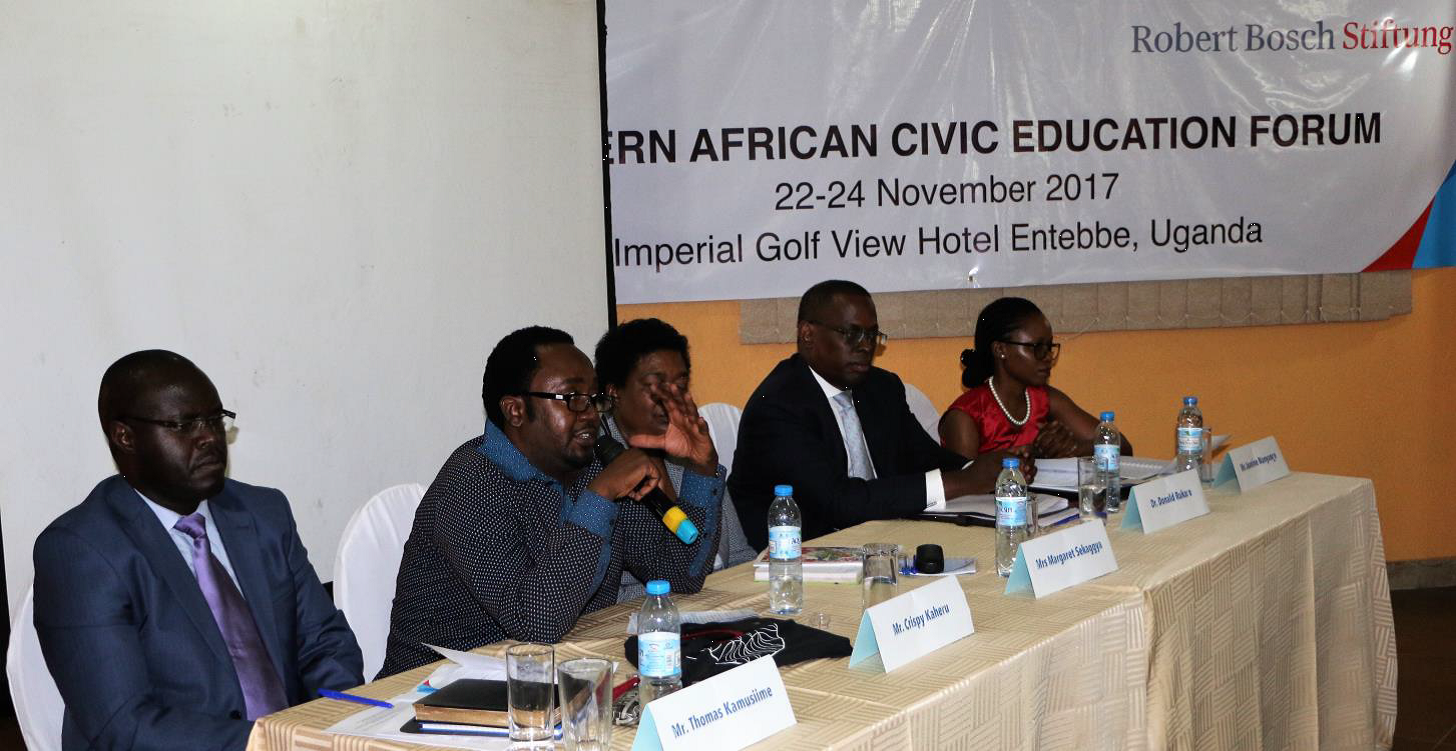 The NACE Supporter Robert Bosch Foundation organized the first Eastern African Civic Education Forum in collaboration with the Ugandan Foundation for Human Rights Initiative, in Entebbe, in November 2017. The Forum brought together 15 of the most influential, young, and innovative Eastern and Southern African Civic Education organizations. The general objectives of the Forum 2017 were to map current challenges and best practices in Civic Education, to provide an opportunity for networking and knowledge sharing among participants, and to explore interest in and ideas for possible future collaborations.

The keynote speaker Hon. Dr. Abdullah Makame (East African Legislative Assembly), reminded the audience of the importance of cooperation, especially in the East African Community (EAC). Since the borders were made by the colonial powers, the East African countries share common values, languages, characteristics, and cultures in border communities. He illustrated his arguments by quoting the African proverb “If you want to go fast, go alone. If you want to go far, go together”

A pre-workshop survey conducted amongst all participants laid the ground for 13 workshops to discuss pressing issues like the involvement of women and girls in CE; how to teach CE in fragmented societies; effective learning methods to unlock young people´s interest; how to establish a culture of peace or whether the political or the economic comes first. Workshop discussions finally led to three main topics that were further elaborated: Sustainability, Innovation, and Networking.

NECE and NACE were represented by the NACE Steering Committee Members Mr Moez Ali, Tunisia, and Mrs Petra Grüne, Germany, who shared their experience about the benefit of networking and ways to establish them. Further, they emphasized the importance to promote solidarity among Civic Education actors (and their sponsors) at all levels, national, regional, and international. Participants stressed their interest in an enhancement of the south-to-south exchange of ideas and experiences on Civic Education via such networks in Africa that would allow sharing of perspectives in the policy formulation processes. Beneath synergies and avoidance of duplication of actions, mutual support in form of peer review, learning, measuring of impact of the actions undertaken and collective advocacy and bargain and to establish a network between NECE, NACE and Civic Education actors in the Eastern and Southern Africa region were mentioned as important potential benefits. These connections would allow structural exchange and advancement of Civic Education programs and could open access to the political framework of bodies such as EU, EAC, Arab League, OECD by joining forces for the sake of Civic Education. As a consequence, the participants established a new network: CENESA – Civic Education Network for Eastern and Southern Africa.