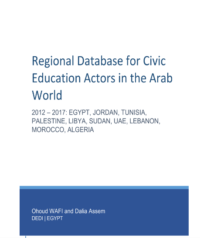 At the Civic Education Conference (CEC), the need for developing a platform for Arab Civic Education actors was raised by the participants. Echoed at the concept of NACE , this need developed to be an objective for the emerging network. Accordingly, the first step was to identify the active organizations working in the region, which was a task led by the Danish- Egyptian Dialogue Institute (DEDI). Starting with ten Arab countries as an initial step to incorporate them in the NACE platform, a research process was initiated. The first phase of this research was a mapping exercise, which aimed to create a database for one hundred active (formal and non-formal) actors in the Civic Education (CE) field in the Arab region. Phase one of the database focused on ten Arab countries: Jordan, Lebanon, Palestine, Egypt, Libya, Tunisia, Morocco, Algeria, Sudan and UAE.

To that end, this phase focused on organizations working with/for civic education, namely: local, regional and international organizations -having a legal status and initiatives of active citizens who work on CE and have beneficiaries or incubated projects.

3) International organizations that implement their projects directly, and finally

4) Donor agencies that are funding one (or more) project in the ten selected countries within the scope of CE.

The importance of this mapping lies in identifying the recent political and civic context of the selected ten countries as a stepping-stone to mapping the important stakeholders involved in CE.  The above mentioned is meant to support CE in the Arab world through including the organizations mapped within the ten selected countries to the NACE upcoming online platform. With the main intention of increasing the number of NACE active membership in the future, through collecting data from social media and other marketing tools. Lots of the contacted organizations became familiar with NACE, which is supposed to help in further cooperation and engagement.